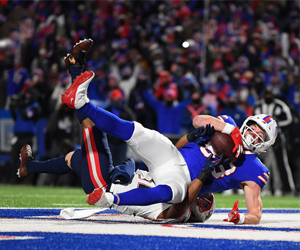 After somewhat an up-and-down season filled with highs and lows, the Buffalo Bills are looking like a powerhouse in the AFC once again. Josh Allen and company came into the NFL playoffs with many questions surrounding whether or not their team was a legitimate Super Bowl contender, but they may have put those concerns to rest after torching the division-rival New England Patriots in the AFC Wild Card game.

Earlier in the season, the Patriots embarrassed the Bills by running the ball down their throats. Rookie quarterback Mac Jones threw only three passes in the entire game, and it was enough to lead New England to victory in Buffalo, 14-10.

That loss motivated Sean McDermott’s squad from there on out as they’ve only lost one game since, which was a nail-bitter against Tom Brady’s Tampa Bay Buccaneers. Buffalo fell short against the Bucs in overtime but showed a newfound grit, which would drive them for the rest of the season.

The Bills won four straight games before heading into the postseason as AFC East champions for the second year in a row. As if the hot streak wasn’t enough to prove this Bills team is for real, Allen put on a show last weekend with an incredible performance against the Patriots in extremely cold weather.

Buffalo crushed the Patriots in the AFC Wild Card game, putting up 47 points in conditions where low-scoring games are the norm. Allen threw for 308 yards and five touchdowns with 66 yards on the ground on eight carries. He was virtually unstoppable, with Bill Belichick and company having no answer for the potent Bills offense.

Following that incredible performance against the Patriots, the Bills are no longer being taken lightly as they are sporting 5-1 odds to win the Super Bowl. Interesting odds considering they’ll face arguably their toughest challenge in the postseason this weekend against the Kansas City Chiefs at Arrowhead Stadium.

Although the Chiefs are as formidable as ever, with Mahomes playing at the top of his game, especially after putting on a clinic against the Pittsburgh Steelers, the Bills are a serious force to be reckoned with, and it’s starting to feel more and more like it’s their year.

“Buffalo might be a legitimately great team that’s playing their best football of the year at exactly the right time.”@Windows | #BillsMafia

After somewhat an up-and-down season filled with highs and lows, the Buffalo Bills are looking like a powerhouse in the AFC once again. Josh Allen and […]
Do you like it?0
0 Read more