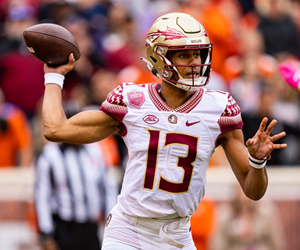 In their last game of the season, the Florida State Seminoles will take on their in-state rivals, the Florida Gators, to end their season and finish as a 9 win team for the first time since 2016.

The Seminoles have dropped three straight games to the Gators, however, they are in prime position to end that losing streak and oddsmakers seem to strongly agree with that.

The Noles are going into the game as a massive 9.5-point favorite over the Gators which is their largest favored spread in this rivalry since 2014. It also marks their first time being favored in the series since 2017.

As for where the public has been leaning leading up to this game, Florida State has been seeing heavy action to cover the spread at 67% of total bets.

Backing Florida State going into this one is that they have been a major force on both sides of the ball this season.

On defense, they have been one of the most efficient in the country as well letting opponents go for just 293.4 yards per game and only 18 ppg each week. Going even further, in their last four weeks they have outscored their opponents by a whopping 173-39 margin.

Strengthening the Seminoles odds, even more, are that the Gators have struggled on defense this season allowing the fourth most ppg to opponents in the SEC at 27.3.

The point total in those five games has also gone under in four of the five matchups as well. FSU has also covered the spread in each of their last four games.

All in all, signs are pointing heavily towards Florida State in this one as they look to close out their season on a five-game winning streak.

GATORS TAKE DOWN THE SEMINOLES 🔥

Florida wins against Florida State and drops their in-state rivals to 0-4 👀 pic.twitter.com/yXHIsyTEvi