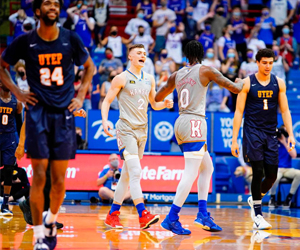 A non-conference battle is going down this Tuesday at the T-Mobile Center in Kansas City, MO. The unranked UTEP Miners will face the #8 Kansas Jayhawks.

Kansas, a historically dominant college basketball program, has the upper hand by a lot but can lose if they become complacent. UTEP, on the other hand, is expected to lose by a lot, so they have nothing to lose in this game.

UTEP is not having a great season so far. They are 4-3 and have only played unranked opponents. In their last game, they heartbreakingly lost to the NMSU Aggies. UTEP fought until the end but lost 72-69. The Jayhawks are their toughest opponent of the season, so they will try to come out the gates strong and surprise this dominant Kansas team.

Kansas is about as good as advertised. They have a strong freshman class and an even stronger group of veterans. Kansas lost to the unranked Dayton Flyers 74-73 three games ago but rebounded by crushing Iona ad St. Johns 96-83 and 95-75, respectively. Kansas should have no problem dismantling this weak UTEP team with their mix of veterans and freshmen.

Kansas is 20.5-point favorites in this game. If they take this game seriously, they will win it handily. They are playing a not-so-great team and will have a lot of fans in an arena an hour away from their campus. That should be enough to propel the Jayhawks to an easy victory over the Miners.


The Squatchpicks.com simulation model, which simulates every College Basketball game thousands’ of times, is up +31.45 units over the last three years. We have released 249 total games with 136 WINS and 113 losses for a win % of 54.62%. A $100 bettor of our NCAAB would have netted a profit of $3,145 and, a $1,000 bettor would have won $31,400. We have released only a handful of College Basketball games so far this season. Now is the time to sign-up and start winning.

A non-conference battle is going down this Tuesday at the T-Mobile Center in Kansas City, MO. The unranked UTEP Miners will face the #8 Kansas Jayhawks. […]
Do you like it?0
0 Read more