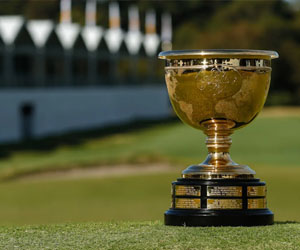 The site of the Wells Fargo Championship will be hosting a team event like this for the first time.

The golf course may wind up being the star of the show, as this could be the ugliest President’s Cup ever.

This is about as traditional of an American-style golf course as possible. It can play up to 7,500 yards and is a par 71. Wide Fairways and minimal rough favor the bomb and gouge style of play that has become synonymous with some Americans.

The ground crew notes for the week, “the course should accommodate long-ball hitters and will not be penal when balls are hit offline.” That line screams advantage Americans.

They also switched up the routing this year to put the famous stretch of 16 to 18, known as The Green Mile, in play during most of the matches.

If the International team has any chance they will need to dominate the special format matches. Thursday starts with foursomes, which are alternate shot matches. They will need to win a majority of these to have a chance going into the weekend. Friday is fourball, and the lowest score wins, so this gives them a better chance again. Once we get to the singles, the US team should dominate.

The World Golf Rankings show that this should be a bloodbath. The Americans are 11-1-1 in the history of this event. The US team’s average ranking is 11.6 while the average International player is around 50. Good luck to them. They have players outside of the top 100. The Liv tour has drained the international pool of talent more so than the Americans.

Thankfully for them, they still have Adam Scott and Hideki Matsuyama. They will need these two to help out their 8 rookies to have a chance this week.

The Golf world heads to the famous Quail Hollow Golf Club in Charlotte, North Carolina. The site of the Wells Fargo Championship will be hosting a […]
Do you like it?0
0 Read more