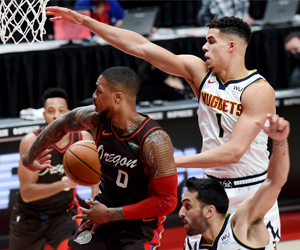 The Portland Trail Blazers take on the Denver Nuggets at home in the Moda Center on Tuesday, November 23, 2021, tipping off at 10 PM eastern time.

Portland is currently riding a three-game win streak, with each victory coming at home. The last team to beat the Blazers was actually the Nuggets themselves.

Within that three-game stretch, Portland took down two Eastern Conference contenders in the Chicago Bulls and Philadelphia 76ers, albeit their latest victory against Philly did not feature Joel Embiid or, of course, Ben Simmons.

The Denver Nuggets, on the other hand, will be trying to break a four-game skid, their last win being that earlier contest against Portland.

Their last two defeats were sans Nikola Jokic, who was ruled out due to a wrist injury. His status for this upcoming bout with the Trail Blazers is still unknown.

While Denver could potentially without their best player and former MVP, the Blazers recently welcomed back Damian Lillard — at least the Dame they’ve known and loved.

After a slow start to the season, Dame Time has made a reappearance in the Moda Center. Over the last three games, Lillard has averaged 28.3 points and 8.3 assists, while stroking over 39 percent of his deep attempts.

Dame will surely be looking for revenge in this one to even the season series 1-1.

Nikola Jokic has given the Trail Blazers fits recently, so all bets will be dependent on his status for the game.

Defending the paint will be key tonight against Portland.https://t.co/KiBni0hURz

The Portland Trail Blazers take on the Denver Nuggets at home in the Moda Center on Tuesday, November 23, 2021, tipping off at 10 PM eastern […]
Do you like it?0
0 Read more