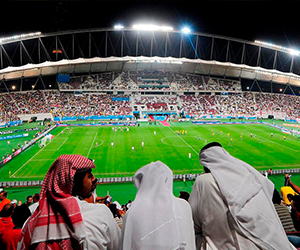 Since Qatar won hosting rights decades ago, the nation has been scrutinized and criticized in many aspects, including human rights violations. Qatar is the first Arab nation to host the football World Cup and has spent billions of dollars organizing the event.

The conservative and energy-rich country was awarded hosting rights by FIFA after an argumentative bidding procedure in 2010. All the accusations regarding the foreign labor policy, women’s rights and LGBTQ stands of the government started mushrooming since then.

Low-paid laborers and the policies regarding foreign labor were the prime talking points from the beginning. Laborers from southeast Asia fuel Qatar’s economy and marvelous stadium for the upcoming World Cup. Out of the total population of 2.9 million, 2.5 million are foreigners.

A report reveals that more than 6,500 immigrant labors have died in Qatar since it won hosting rights eleven years ago. Most of these people are from India, Bangladesh, Pakistan, Nepal, etc. Qatar has paced up its building, roads, and public transportation projects, besides seven new stadiums aiming for the 2022 World Cup.

The government has denied the alleged abuse of migrant laborers and claimed to improve its policies. Though certain reformations have surfaced its name over the criticism, there is still plenty of room for improvement.

The country has adopted a minimum monthly wage of $275 and abolished the ‘kafala’ system, which restricted the workers from changing their job or even leaving the country without the employer’s permission.

Rights groups like Amnesty International and HRW have argued that FIFA and Qatar should do more to compensate dead or injured workers on mega projects. They demanded FIFA to match up the World Cup prize money of $440 million as compensation.

Moreover, Qatar has criminalized homosexuality which is another reason for the objection. According to the laws, convicted gay or lesbian can be imprisoned for one to three years.

The European soccer federation has requested team captains to carry rainbow armbands to show solidarity with the LGBTQ community during International fixtures. Although, Qatar is welcoming fans from any sexual orientation open-heartedly, everyone must be respectful of the conservative social constructs.

On Tuesday, veteran activists showed up in front of Qatar’s National Museum, protesting against the alleged imprisonment of members of the LGBTQ community.

In less than one month, the gulf nation will be hosting the world’s biggest football event on its soil on 20th November. Other than the contestants, it will be a big challenge for the hosting nation.

'Gary Lineker is the most ridiculous man in the country…If you really want to show your support for the World Cup, start by not following Gary Lineker on Twitter.'

Qatar is hit by unprecedented criticism for hosting the football World Cup. Qatar’s ruling emir, Sheikh Tamim bin Hamad Al Thani retaliated against the fierce campaigns […]
Do you like it?0
0 Read more