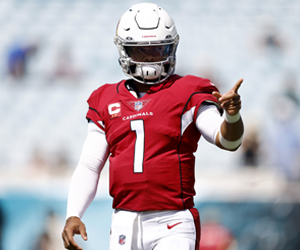 Another Thursday night football game and we get another dismal match-up.

Let’s hope that Al Michaels and Kirk Herbstreit are going to be able to handle themselves through another brutal-looking contest.

This Thursday we get the luxury of watching the Arizona Cardinals play host to the New Orleans Saints. Both of these two teams need a win in a very bad way, as they both come into this game with a 2-4 record.

Kyler Murray and Kliff Kingsbury are sporting losing records in their careers with the Arizona Cardinals. Kyler has had flashes of excellence in his young career, but he has also had some serious duds.

He has a few highlights this season that makes any coach salivate, but they have been pedestrian this year on offense.

A lot of the success that Murray has had in his career has come with DeAndre Hopkins on the outside. He has finally returned from his PED suspension. When Hopkins is healthy, he is as dominant of a player as the NFL has to offer.

He wins the jump balls, runs crisp routes, and is a stud blocker in the run game.The offense has had major injury issues this year as well. Marquise Brown is out for a few weeks, so the Cards added malcontent Robbie Anderson this week.

The Saints haven’t been much better. They have lost four of their last five games and need this game to keep pace with the Falcons and Buccaneers in a division that has not had great football being played thus far.

The Saints have battled injuries at key positions all year. Jameis Winston has been out with a back and ankle injury, and this week it got worse with Andy Dalton suffering an injury as well. The Saints are still without Jarvis Landry, Michael Thomas, and Marshon Lattimore Thursday as well.

If the top two QBs are going to be able to play, there should be a whole lot of Taysom Hill in this contest. He had an incredible game against the Seahawks. They will be more of a ground-and-pound team if they have to lean on the emergency QB.

The defense of the Saints has not had luck when it comes to closing out games. Without Lattimore to follow around DeAndre Hopkins, it could be a long night for the Saints.

This game could very well give us an exciting match-up if Murray can scramble and make plays, but also has a great chance to be another disaster on Thursday night.

One of the most ridiculous runs in #Saints history happened vs. the Cardinals via Saints legend @ReggieBush! 🤯

📺: #Saints at Cardinals on Thursday, 7:15 pm CT on @PrimeVideo pic.twitter.com/FmDCBnR8lr

Another Thursday night football game and we get another dismal match-up. Let’s hope that Al Michaels and Kirk Herbstreit are going to be able to […]
Do you like it?0
0 Read more